The first event I chose was the 1896 Supreme Court case Plessy v. Ferguson. In this case, the Supreme Court upheld the constitutionality of laws requiring racial segregation in many public institutions, including medical offices, restaurants, and schools. The Supreme Court did throw in the “separate but equal” clause, which stated that black and white facilities had to be of equal caliber and condition. However, the overwhelming majority of “colored-only” institutions were greatly inferior in quality to their white counterparts. While the quality of drinking fountains or waiting rooms seems somewhat trivial, a sub-par school and a sub-par education are anything but. Black schools were poorly funded and maintained, and therefore black children did not have access to the quality education that whites had the privilege of receiving.

The next event that I chose was the 1954 Supreme Court case Brown v. Board of Education, which declared laws calling for segregation of blacks and whites unconstitutional. In essence, it overturned the decision in Plessy v. Ferguson. Although it took nearly 60 years to realize, the idea of “separate but equal” was just that; an idea. It was not applied in practice, and therefore blacks were at a huge disadvantage in almost all areas of society. After this case, many institutions became integrated. Schools, however, did not all see integration immediately; there were plenty of loopholes. For example, many previously white-only schools put into place an “open enrollment” policy, allowing anyone to enroll, but did not actually accept any black students. Some states rejected the law altogether. However, Brown v. Board of Education did set the pace for the civil rights movement and remains one of the most important court decisions in history. 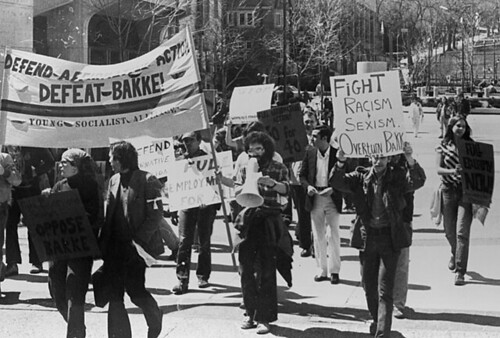 The final event I chose was the 1978 Supreme Court case Bakke v. Regents of the University of California. The Court declared the use of racial quotas in the University of California at Davis unconstitutional. However, the court still allowed race to be use as “one of many” determining factors of admission, so affirmative action was still allowed. The case arose when Allan Bakke, a white man, applied to the school but was rejected because the school’s white quota was filled. Several black students with lower grades than him were admitted into the school instead. Many people at this time believed that these quotas were perfectly fair to compensate for past discrimination against blacks. However, others just thought it was a form of reverse-discrimination and that it placed qualified white people at a disadvantage. Either way, affirmative action was still allowed and is around till this day, although it is still a hotly debated issue.

These events are related because they are all Supreme court decisions regarding race issues. More specifically, these decisions reflect racial issues in public institutions. Although in the first two cases education is not the primary focus, schools were still a primary social institution being affected by all of these decisions. These cases were all impacted by racism and its repercussions. The first case put blacks at a disadvantage in an educational environment. The second tried to turn their situation around by forcing integration. Some time between the second and third event, affirmative action and racial quotas were installed in order to balance out past discrimination against blacks in good schools. Then in the third event, these measures were challenged by a man who claimed it was “reverse-discrimination”. In many ways, these cases were like a chain of events, one leading to another, all starting with racism.

This entry was posted in admin only: Featured, Assignment due December 7, TV24. Bookmark the permalink.