Awkwardly standing near the stage of the Highline Ballroom with about ten other onlookers scattered around the spacious and dim lit room, I noticed a sudden change in the venue’s atmosphere as the next band made their way towards the stage. The air was now filled with liveliness, as passionate and anxious fans began to crowd into the previously empty room, pushing me closer towards the stage.

Gradually working their way into their first song of the evening, A Great Big Pile of Leaves played a flawless two minute long introduction, reminiscent of introductions given by the legendary band, Pink Floyd. 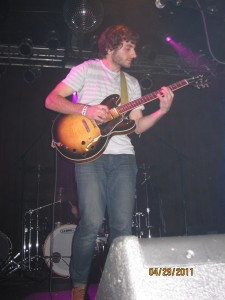 Once lead singer and guitarist Pete Weiland began to sing the show took off, as the supportive and energetic crowd cheered, danced, and banged their hands to the beat against the stage.

Although some songs were repetitive at times, A Great Big Pile of Leaves did everything but bore their crowd. Their most catchy and enticing song, Alligator Bop, is composed of lyrics such as, “We’d drive around for hours with no direction and no goal except to act stupid, and intertwine ourselves into situations to laugh about.” Weiland passionately yet softly sings while innovatively taking simple words and construing them to the beat, repeating certain vowels to give the word a stuttering effect. Weiland’s improper pronunciation at times leads to original sounding lyrics, as the singer manages to stay in tune.

With the electrifying sounds of the guitar, drums and bass bouncing off the walls and causing a rush of adrenaline throughout the audience, the band was applauded for the various techniques used to enhance the sound and quality of their music. Weiland used a technique called finger tapping while playing his guitar, a technique typical in more rock-oriented genres, which was used well during the performance.

“When I heard them I had a very entranced feeling,” said Brooklyn resident Antonio Rosa who attended the show. “The way they organized their music was very atypical which drew my attention greatly.” 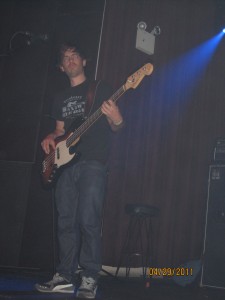 A Great Big Pile of Leaves, the unique name founded by Weiland, began in 2007 when Weiland and drummer, Tyler Soucy, decided to write material and form their own band, as bassist Tucker Yaro joined later on. Their first full-length record, “Have You Seen My Prefrontal Cortex?” was released the summer of 2010.

Although the band is currently unsigned, they are now on tour, opening for The Appleseed Cast. They will be back on the road again this fall, touring with Motion City Soundtrack, Say Anything, and Saves the Day.

A Great Big Pile of Leaves has great big journey ahead of them.