A Great Big Pile of… Well, You Know 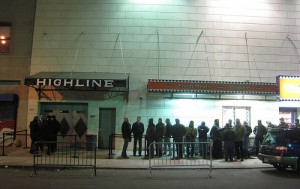 Unless most of that line was for Western Beef, this could not have been the same night.

Once you step past the facade of the Highline Ballroom, a dull white brick wall shared with a sketchy looking Western Beef (not that there’s any other kind, to my knowledge), the whole feel of the evening changes. I stepped in out of the misty fog and was immediately greeted by a strange ambiance for a rock show; the only lighting was provided by a few red spotlights over the dining area and bar, a strobe over the empty stage, and a few scattered candles. Strangest of all, to me anyway, was the pleasant smell and cool air; But I suppose I’m just a little too used to basement and garage shows. All of the lovely ambiance and friendly staff, however, couldn’t save the night once the bands took the stage.

I couldn’t tell you much about the first opening act, Two Lights , since I spent a good amount of their Jonas Brothers-esque pop set of breakup songs at the bar wondering if I could possibly justify spending $7 on a beer. After half-hearing a few of their songs, it was more than justified. 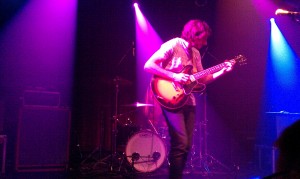 I would tell you his name, had he taken the time to introduce himself

I made my way back to the base of the stage to catch A Great Big Pile of Leaves set up, rather unprofessionally at that. There was no sound check, no change in drum kit to accommodate the new drummer, not even an introduction of the band or members, which to me is just a matter of respect for the backup members and establishes a relationship with the crowd, which this typical Indie/Pop-rock trio could’ve used to work up some energy.

As with any local band that performs near their hometown, which for Pete Weiland, Tyler Soucy and Tucker Yaro is Brooklyn, there were some excited fans up front, seemingly friends of the brand, who were able to sing along with the scrappy looking lead singer through all of his melodramatic Hipster anthems like Alligator Bop, which seemed to be their best known track. 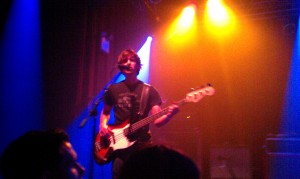 It could’ve been the sudden tight gathering of the crowd increasing the temperature in the once comfortable room, but I blame the half hour of bad Indie movie soundtrack being performed on stage for the headache (and for the $25 tab).

All in all, a bad gig with good company to laugh about it with is still a good night in my books. I suppose if I had stuck with my original low expectations and not let the ambiance trip me up, I wouldn’t have been as annoyed. Then again, bad music is bad music no matter the lighting.