In the original 1964 publication of Charlie and the Chocolate Factory by Roald Dahl, the Oompa Loompas are not Oompa Loompas at all, but instead they are described as a tribe of three thousand ‘regular’ African Pygmies that were imported by Wonka from “the very deepest and darkest part of the African jungle where no white man had been before.” They come to replace the tired white workers because they were willing to work for Charlie in exchange for free chocolate (since they had only eaten beetles and barks of the bong-bong tree). The original illustrations depict a group of black guys, barely clothed, laughing hysterically; and the change is only made in 1973, when the publisher Knopf insists on changes. The new editions changed the tireless and loyal servants of Wonka into small looking hippies with ‘golden hair and rosy-white skin,’ then later to multicolored futuristic punks. 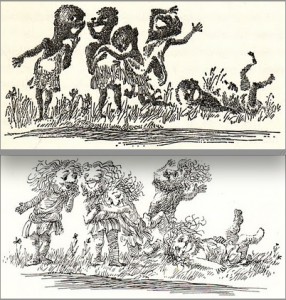 A large part of inspiration for Charlie and the Chocolate Factory was based on actual events involving real chocolate companies. Dahl knew what was actually happening— cacao plantation workers in Ivory Coast (World’s biggest producer of chocolate) were practically enslaved African children. However, he was able to utilize Racial Innocence to mask the truly cruel reality. Because he took something everyone loved— delicious chocolate— and made a fantasy out of it, readers overlooked the severely racist implications that came with the famed Children’s Book.

“The Little Glutton” in Flowers for Children by Lydia Maria Child depicts a story about Laura, a girl that eats so much, her head starts to ache. She then gets annoyed when her brother comes and pulls on her curls, but she wouldn’t if she didn’t eat so much. The story tells that her kitten, her canary birds, the bees, and the squirrels are more wise than her because they eat enough to stay alive, and productive instead of eating more than they need like she does. The story ends with comparisons like: “I had rather be a bird, even if they shut me up in a cage, than to be a glutton,” to highlight the severity of Laura’s eating problem.

This story reminded me a lot about the character Violet in Charlie in the Chocolate Factory. Violet is one of the golden ticket winners, but also holds the record for chewing the same piece of gum for the longest time in the world. She is a very competitive girl in nature, so when she gets to the factory, she always tries to get everything first. She gets overly excited about a gum that Charlie has been tinkering with that tastes like tomato soup at first, then roast beef, and finally, blueberry pie and ice cream. All the while, Charlie is telling her to spit it out, but Violet insists, and finally she starts to swell up while simultaneously turning purple. She eventually has to be rolled out into the juicing room to get squeezed before blowing up, and then has to leave the factory.

This quote from Catcher in the Rye not only demonstrates Holden’s desire to save every child he can from falling off the cliff while they are playing (this need that stems from one, losing his brother Allie– whom Holden calls ’the better of the two’ and always saw him as the smartest, happiest kid alive; and two, his inability to save himself from the crudeness of the world) starting with Phoebe, first and foremost. Ironically, this poem by Robert Burns is about a girl that goes out into the Rye field to meet someone for a “kiss” and then has to return to her judgmental Puritanical society, with her underwear wet, and ready to be castigated for being ‘easy.’ In other words, the poem is about casual sex (and in Catcher in the Rye it arises the question of how J.D. Salinger is romanticizing Caulfield’s fantasy about protecting little kids, as well as how he is addressing whether casual sex is okay or not through Holden Caulfield. If by being thrown off the cliff means one comes into adulthood (and by extension, exploration of one’s sexuality) does that mean tragedy, or is it just the natural cycle of life?

This conflicts deeply with Holden’s own sexuality because throughout the book one sees him not being able to come to terms with it. This is quite possibly largely due to the fact that he suffered trauma from Allie’s passing at such a young age, and then lashed out and turned into a rebel. However, he seems to find himself in a weird medium (like many of us do in our adolescence) where he wants to fight for innocence, but he’s corrupted himself too much to have his own so when he goes to explore his sexuality, he can only do so by objectifying the person he is exploring himself with.

Mary, Mary, quite contrary
How does your garden grow?
With silver bells and cockleshells
And pretty maids all in a row.