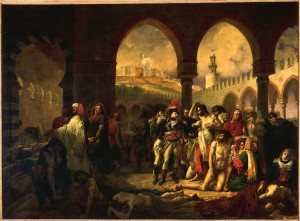 I have always been interested in art and history, but didn’t realize how much they are intertwined.  Last semester I took an Art History class, and found my self on the edge of my seat, eager to learn more.  The evidence of how people interacted with the world from centuries ago, can be explored through timeless pieces of art.  With a trained eye, you can see little details that open a door to a first glance of what surroundings manipulated the artist’s brush.

On the other hand, when the power of the brush becomes a political tool, it can be used to distort history.  During the French Revolution, Napoleon used his own artist to portray him as a Saint to manipulate the harsh opinions formed from his cruel tactics.   In this famous painting above, by Antione Jean-Gros.  Napoleon Bonaparte is depicted as a Jesus like figure, touching soldiers that are covered with the plague with his bare hand.  As we all know, Napoleon was no such creature. That short man was far from a heroic god.  But without information streaming though a television, I am sure that this painting swayed many to believe him to be that person.

So the question is, is art reliable evidence of history?  As sociological evidence, I believe it is a great source, but as factual history of a person, it should always be backed up with stronger evidence.  I believe everyone wants to be painted on their good side.