One of the freedoms that Eric Foner discusses in his Chapter on Reconstruction is political freedom. What this mainly boiled down to was the right to vote. Before the reconstruction era, this right was limited only to White citizens excluding all women and Blacks. Soon after the abolition of slavery, ex-slaves began to see political freedom as a right and a means of empowerment.

According to Foner, the close results of the 1868 presidential election led congress to adopt the 15th amendment in 1869 which guaranteed black suffrage by disallowing federal and state government from denying any citizen the right to vote based on race. Although in the constitution blacks were guaranteed the right to vote, in practice they still were not given full political freedom. There were other non-racial limitations to their political freedom such as the institution of literacy tests, property qualifications and tax polls. This inevitably excluded many blacks who did not meet such requirements from voting. What’s more, in the late 1870’s, violence broke out against black voters with democrats driving out former slaves from the voting polls.  Although about 2000 African-Americans held public offices during Reconstruction, the political freedom of the black man was evasive. 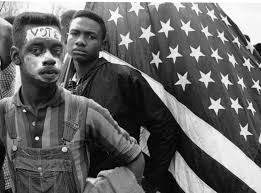 It was not until the enactment of the Voting Right Act of 1965 that the black man was given full political freedom. The law eradicated discriminatory practices in place that systematically denied African American citizens their voting rights.  Moving past the Reconstruction Era and fast-forwarding to the 21st century, we can say that political freedom not just for the blacks has become a reality. Today, the right the vote is extended to all citizens 18 years and old, black and white, male and female.

This entry was posted in September 16 Assignment, TV24 and tagged 15th Amendment, 15th Amendment and the Right to Vote, African-American, Freedom. Bookmark the permalink.