Chief Joseph, the leader of  Nez Perce, felt that the Americans are taking away what belonged to him and his tribe. O.O. Howard chased the indians 1.700 miles west in order to conquer there land. Americans would invade Indian reservations to conquer the land itself, but most importantly because the land provided a natural resource, gold. By invading and chasing the Indians out of their land, without intention, they were transforming Western America.

Chief Joseph delivered a speech a few years later in Washington. He delivered this speech in front of many people, including President Rutherford B. Hayes. Chief Joseph complaints that the indians are not being treated like the whites. In his speech he say’s “Give them the same law”, The Indians should be able to live the way they did before the now called Americans came to America. The main purpose of the speech was so that the situation, equality to Indians, would be recognized and his complaints should be answered with a solution. Indians were offered to become American Citizens if they would leave the tribal setting and join the American society. 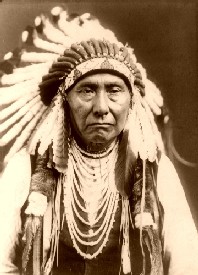 This entry was posted in admin only: Featured, KM24, September 21 Assignment and tagged Freedom, Indians, The Gilded Age. Bookmark the permalink.

One Response to Let Me Be A Free Man