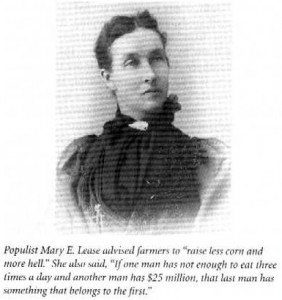 Mary Elizabeth Lease joined the populist party because during the 1880’s and 1890’s, there was economic insecurity for cotton farmers and sharecroppers due to falling cotton prices. The populist came to be from the Farmers’ Alliance which served to provide the financial security for farmers by raising the prices of crops back up. Mary E. Lease then joined and became a vital part of the alliance to protect and boost farmers’ and laborer’s economic well-being.

If I could ask Mary E. Lease two questions today, they would have to be
– How did it feel being a vital part of a well-known and impactful movement in a time period when many women weren’t even allowed to vote yet?
– Being a lawyer, wouldn’t it have been in your best interest to not support the populist movement, why did you decide to join and make such an impact that you’ve became one of the figureheads of the movement?