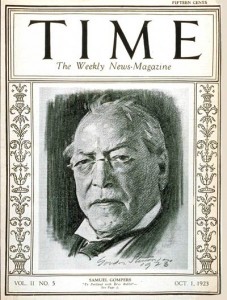 What caused Gompers to go from a regular cigar roller to the 40 year president of the most powerful union in America? He was born in 1850 in London, into a cigar making family. He started working at 10 and joined Local 15 of the United Cigar Makers when he was 14. At his job an union, he would converse with older workers, most emigre socialists and labor reformers who he would always credit for his commitment to using unionism as his platform to social reform. Gompers also favored unionism because he thought the only viable alternative- legislative action- had failed, especially after the New York Supreme Court overturned two laws regulating tenement production of cigars that he helped pass.

Two questions I would ask Samuel Gompers are:

1. Why did you advocate trade and craft unionism over general unionism?

2.Why did you believe in political nonpartisanship for unions?