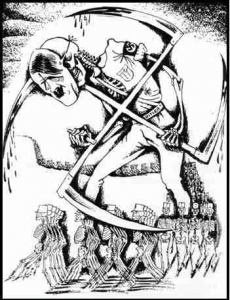 Hilter lead Germany into World War 1.In this photo it portrays Hitlers dictatorship. He was known for controlling Germany during this time. He was known for killing 6 million Jews also known as the holocaust. When dictator, he believed that the most important thing a country should have is a strong army force. The author drew this photo this way for several reasons. To show that hitler controlled the army. Hitler is portrayed bigger because he had complete control of Germany. He portrayed as a Death Reaper, ironic isn’t it? In the photo it the Knives/blades are shaped as the Nazi swastika sign is. Hitler began was a house painter before he came in control of Germany. Yes, he was a genius, but he was sick minded.