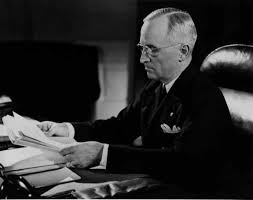 The Truman Doctrine was passed in 1947.  The Truman Doctrine was passed to help Greece and Turkey escape communism.  The Doctrine’s purpose was to not let the Soviet’s to expand. If Henry Truman didn’t pass this doctrine, the United States might be apart of the Soviet’s today. Communist will soon take over and take over most of the world. Then there wouldn’t be any freedom in America like we have today.

This entry was posted in KM24, November 9 Assignment. Bookmark the permalink.