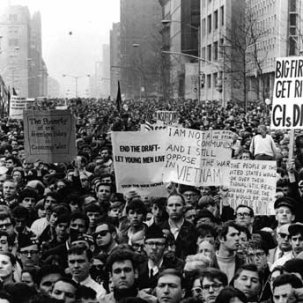 I know this leaks a bit to the 25th chapter (however Vietnam War is mentioned in Ch. 24). Here you have two pictures, one shows a group of young people striking against the war in general. We can safely assume that being involuntary shipped to a far away country to fight someone else’s war is a massive infringement on one’s freedom.  The second exhibit is a pin with a message calling for lowering the voting age (as plenty of young men shipped to the war at the time were between ages of 18 to 20, below the voting age, unable to vote against the current governement).

This entry was posted in November 16 Assignment, TV24. Bookmark the permalink.