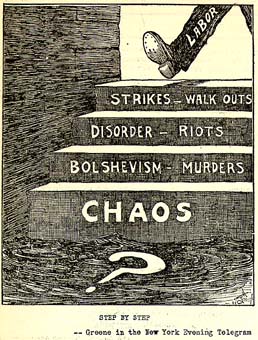 After WWI and the Bolshevik Revolution in Russia, many people in the United States feared communism. The First Red Scare, from 1919-1920 was a result of the intense patriotism in the U.S. at that time. Anyone that spoke against the government or was “unpatriotic” would be stigmatized as a communist or “Red”. The authorities saw unions as a threat of revolution. As a result of strikes and a bomb campaign, Attorney General A. Mitchell Palmer tried to quell these radical labor organizations by conducting unwarranted arrests, illegal search and seizures and deported hundreds of immigrant radicals. Palmer had very little regard for the suspects’ civil liberties. While the scare was intense it was also brief.

The end of WWII in 1945 marked the beginning of the Cold War. There was a dramatic increase in communist fear during the 1950s. The atmosphere of anti-communism was largely due to Senator Joseph R. McCarthy. McCarthy accused numerous people and government agencies of being communist and announced that he had a list of 205 communists working for the State Department. This was all a hoax as McCarthy’s numbers kept changing and never identified a single person of actually being a communist. McCarthy’s crusade came to an end in 1954 when he accused the army had communists. The nationally televised hearings showed how ridiculous McCarthy’s accusations were in that he didn’t support them at all with facts. Like the First Red Scare, the 50s were a time of abuses of power to stem communism and the courts did nothing to cease the political repression.

In 1971 the New York Times started to release the Pentagon Papers. These top-secret papers by the Defense Department revealed how presidents had misled the American people about the Vietnam war. They revealed how the U.S. had purposely expanded the war by bombing  Cambodia and Laos and coastal raids on North Vietnam. President Johnson during his election campaign promised the American people to decrease involvement in the Vietnam war, while he had already planned to bomb North Vietnam before the election.  This resulted in Congress passing the War Powers Act, which requires the president to seek congressional approval for the commitment of American troops overseas. All these events show how there were major political abuses of power in the name of anti-communism

This entry was posted in admin only: Featured, Assignment due December 7, TV24 and tagged anticommunism, mccarthyism, Pentagon Papers, Red Scare. Bookmark the permalink.