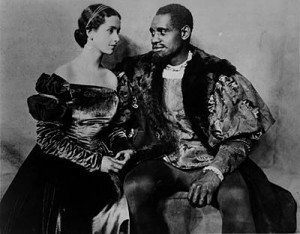 William Shakespeare’s Othello is seen as a vicious story of love and revenge on the surface. Iago, the story’s villain, spurs on the characters to hate each other. His hatred stems from a rumor that circulates about Othello, the Moor, or outsider, sleeping with his wife. Iago pushes the story to explode with tension and confusion in the end. Surprisingly, some modern day issues overshadow this drama. Othello shows how word of mouth can be dangerous and have unpredictable outcomes. A modern day example can be texting or Facebook. Oftentimes, what we mean to say in a text message does not come across correctly to the reader. It can happen that we mean to say something nice, and the reader can interpret it with some hostility. Another modern day issue covered in Othello is racism, and the issue of being an outsider. Othello is a man from a different country and he is treated like an outsider throughout the story because Iago creates an air of mistrust around him. Being the new kid is never easy, so Othello asserts himself in the court and fights to prove his worth.