I love Sita and all that she stood for but I would have never been able to hold on for as long as she did. For me to be loyal to a man only for him to accuse me of being unfaithful is so unfair. Then after she proved to him that she was indeed faithful Rama allowed rumors to again sway his decision. Sita Sings the Blues was a great interpretation of The Ramayana. The blues gave it a modern touch and I enjoyed that. But back to Sita… she devoted herself to a man only to be asked to prove herself to him over and over again. That’s just unfair, she could have just given herself to Ravana, you never know, she may have eventually liked it. Keyshia Cole’s “I Should Have Cheated” talks about a women being accused of infidelity even though she is innocent. If I could create an adaptation to Nina Paley’s work I would give it an R&B twist and Keyshia Cole’s song would be the headliner. I wonder if it ever crossed Sita’s mind that she should have been unfaithful being that Rama didn’t believe her anyway. Considering that Rama felt Sita must have been unfaithful it makes one wonder about his extracurricular activities while he was away from his her.

Posted in Ramayana | Comments Off on

The story of Ramayana is about a young handsome prince name Rama and his beautiful wife, Sita.  King Dashratha has three wives and four sons.  The eldest son, was the one and only Prince Rama who was known for his outlook and idealist values.  Rama was considered to be the seventh incarnation of Lord Vishnu.  King Dashratha decides to give Rama the rights to the throne and crown him king as Rama was the righful heir to the throne.  However, King Dashratha’s second wife became jealous and envied Rama and wanted her son to be crown the king after Dashratha.  She reminded the king of a promise he made to her a while back and made him crown her son as the next king.  Soon after, Rama was exiled for 14 years and his wife Sita stayed by his side and joined him on his journey.  Rama obeyed his father and bid farewell to the kingdom and his father.  I respect the fact that even though Rama was exiled out of the kingdom and was not able to claim his rights to the throne, he still respected his father’s decision, even though the decision did not seem fair.  Rama was a very faithful son and these traits of Rama fulfill the qualities of a true king.

Posted in Ramayana | Comments Off on Ramayana 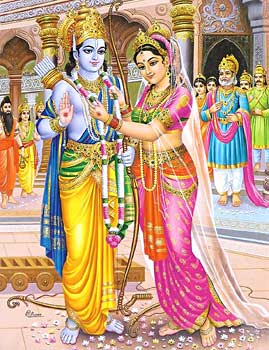 The Ramayana was unlike all the text in the great works class because of its religious significance. To truly understand it, one most first understand Hinduism and the purpose of the story as it fits into that context. The religion is not as organically unified as the name suggests and is rather different depending on region in India. It is very hierarchical giving each follower a place or caste. But like most religions the religious text crucial to following its laws were privatized to certain groups.  Vedas were only read by priest and the Upanishads were delegated for the elite. Hindu knowledge meant for the people were made in the form of epics. These epics were easy to follow, remember, and recite.

With that in mind, it is easy to understand why Rama is painted so heroically in the story. He is Hinduism reversion of Jesus Christ, literally meaning the perfect man. While he obeys all orders set by his father and defends and rejects the virtue of his wife an ideal standard is set. Sita staying by her husband against all odds even in his mistrust is the most whimsical rendition of unconditional love. Rama is a manifestation of the god Vishnu and Sita of  the goddess Lakshmi while on earth they are still divine. This fact justifies both characters making this epic not just a literary tale but a recount of the Gods themselves.

Posted in Ramayana | Comments Off on Ramayana

The Ramayana of Valmiki

The Ramayana of Valmiki a story about Rama and his wife Sita. Rama is the one that is suppose to be the next king, but his father’s other wife wants her son to become king and tells Rama that he can become king if he goes to live in the forest for certain years. Rama agrees and accepts , but he tells his wife to stay even though she wants to go with him. Sita says to him that he is her husband so she will go with him to anywhere just so she can stay with him. She finally convinces him to let her go. After they have lived in the forest for a long time, the evil king appeared and kidnapped Sita. Rama then went to go save Sita. After rescuing Sita, Rama became not trusting Sita being pure. After they returned to the kingdom , Sita soon became pregnant. But Rama has doubts about her pregnancy, so she sends her away. Sita became heart-broken, crying all day. After years, Rama came to see her. He ahs finally returned to her. In the cartoon” Sita Sings the Blues (animated film by Nina Paley)  “, it shows us how the story can relate to the modern times. The author is being abandoned by her husband. Here are some pictures of the film.

The Ramayana is a story about a strong wise prince and his beautiful wife, Sita. Rama was due to become the king, but was instead banished because of a promise that the king had to keep to his wife, Kaikeyi, who wanted her favorite son, Bharata to become the next king. So Rama was sent into exile in the forest for fourteen years. Sita, Ramas wife, accompanies Rama into he forest. They live a happy and simple life in the forest, until one day Sita gets abducted by King Ravana, the king of Lanka. Rama sets out to recapture his beloved wife Sita. Ravana likes Sita and wants to be with her, but all Sita cares about is Rama. Rama eventually fins King Ravana and Sita, and he defeats the King and recaptures his wife. When Rama finds out that Ravana caused Sita to be unpure, he no longer wants to be with Sita, even though he went through all of that trouble to save her. Sita undergoes tests of purity and passs, but they do not matter to Rama and Sita leaves. This story is very gripping and interesting. It shows the love that two people shared and how it all was lost. 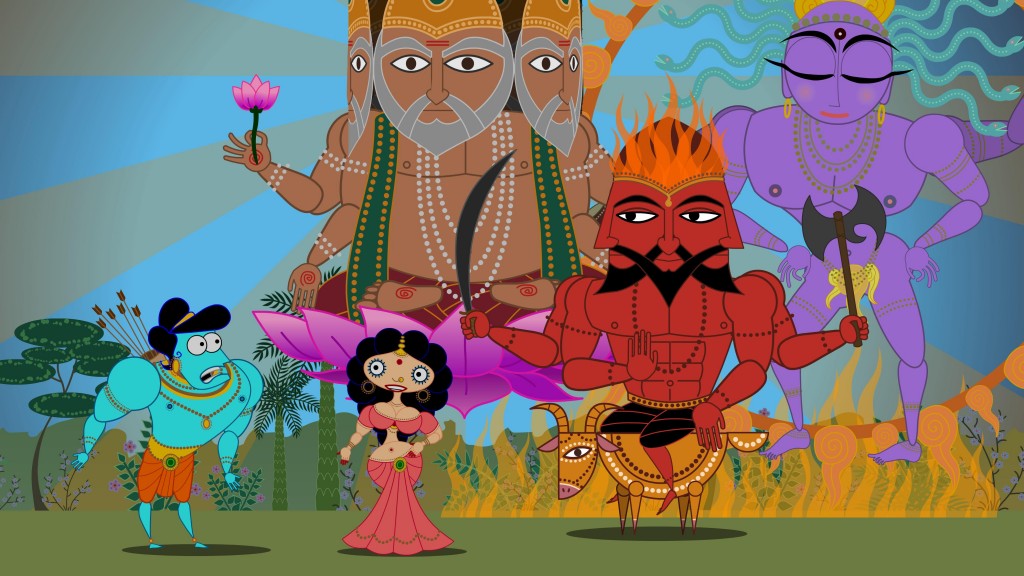 Posted in Divine Love, Ramayana | Comments Off on Sita Sings the Blues