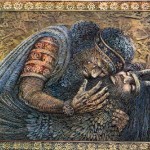 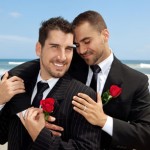 Now it was clear to see that once Gilgamesh met Inkidu it was a match made in heaven. They were made for each other. But one can’t overlook the homosexual undertone of their relationship. The seemed way too close for comfort, at least for my comfort. The way that their love toward each other was described was very peculiar. With that being said, you would think that we wouldn’t have such an issue with homosexuality to this very day. Why is it still taboo? People fighting in the army have to keep their sexual preference to themselves or they can be discharged. These people can fight for their country but must hide their true colors from their country. Gilgamesh and Inkidu were very powerful men, both part god, their relationship with one another didn’t weaken them nor did it cause people to look at them differently. Their bond caused them to want to do “manly” things such as fight and conquer. Their fear, when it was time to fight Humbaba, wasn’t them being feminine, it was them being human. It’s crazy how the first written story had traces of a homosexual relationship and now thousands of years later the Gay Rights moment is still being fought in the “land of the free.”

This entry was posted in Gilgamesh. Bookmark the permalink.