You are here: Home / Zicklin Online Learning and Evaluation / Students in Hybrid Sections Outperform those in Traditional Face-to-Face Classes on a Common Final

On a Sunday in the Fall of 2016 faculty teaching Principles of Microeconomics (E1001) gave a common final to 868 students enrolled in the course.  Faculty in all sections used the same text and online platform and all agreed to cover the same chapters.  Four of the ten sections were run as hybrids that met once a week for 75 minutes; three sections were traditional classes that met twice a week for 75 minutes each and two traditional sections met once a week for 2.5 hours.  Faculty used the publisher’s online platform to varying degrees but, in general, the hybrid sections required more online work than the traditional lectures.

To create the final exam each of the ten faculty submitted 15 questions to a senior faculty who was not teaching the class.   The senior faculty selected 40 questions insuring contribution from each participating faculty.

Despite the uniformity of content, there were large differences in student performance on the final exam by section. Table 1 shows the unadjusted and adjusted mean differences in scores on the final by professor and format.  The coefficients are the mean percentage-point differences on the final exam between each listed class and the reference class, which was a hybrid section whose students had performed the best. Adjustment included controls for students’ GPA, SAT scores, cumulative credits, gender, and class status. [1]

Why were adjuncts teaching the hybrid section so successful?  One explanation is that the adjuncts followed the course developed by a senior faculty who was not teaching that semester.  The course made extensive use of online instructional material.  Faculty in the hybrid classes required that students complete online exercises every week.  A more detailed analysis is needed to test this conjecture, but the requirement of extensive online work appears to be a key difference between the hybrids and the traditional classes.

The results underscore the need for common finals in large introductory classes.  This is the only way to assess pedagogical innovations, supervise adjuncts, and improve student outcomes. 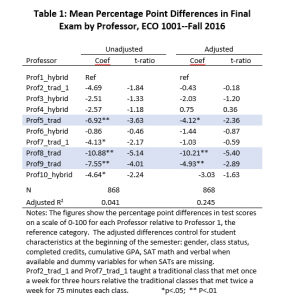 [1] We thank John Choonoo of the Office of Institutional Research for baseline data on student characteristics.