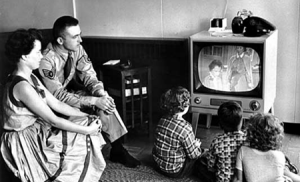 Among the many freedoms that were evolving during the 1950s included owning a car of your own. Having the luxury of a car at the time was part of the “package” that truly defined your freedom which also included a television and your own home. The video shows the woman speaking of the many benefits owning a Ford has provided her with. She previously felt like a prisoner because she was so limited to go to places but owning a car has given her the access and choices to how she wants to do things.Cars were certainly paving a new ground for the 1960s by wide spreading the ownership of a car for many citizens through commercials like this one.The picture below the video shows a family gathered around the television. The television created a lasting effect on society which followed for many decades. For people this was considered to be a freedom because it allowed them to see a variety of things they weren’t aware and also brought families together.

This entry was posted in November 16 Assignment, TV24 and tagged 1950s, Ford, television. Bookmark the permalink.