On December 7, 1941, Japanese planes bombed the naval base at Pearl Harbor. Approximately 2,000 American servicemen were killed and some American battle equipment such as aircraft, battle ships and naval vessels were destroyed. The bombing of Pearl Harbor didn’t cause the United States to enter the war, due to the fact that they were already at war against Germany. However, this incident caused the United States to declare war against Japan.

On February 15 1898, an explosion destroyed the USS Maine taking 270 lives down with it. Yellow journalism led people to believe that Spain was responsible for the destruction of the ship; however, a later investigation concluded that the explosion of the USS Maine was probably an accident. This incident drew the United States into the Spanish American War to aid Cuban patriots in their struggle for liberty and freedom.

On September 11, 2001, the World Trade Center was destroyed by terrorists who hijacked four planes, sending two of them into the twin towers in New York City. Approximately 3000 people including passengers, pilots and flight attendants, victims in the twin towers, firefighters, and police had died on this tragic day. Immediate damage and recovery costs ran into the billions of dollars. Approximately 80,000 people lost their jobs in NYC area due to the destruction of the World Trade Center and damage to the surrounding buildings.

The Bush administration blamed Al Queda for causing such a grief-stricken moment in American history. This event enveloped the country in a cloud of fear, which began, what the Bush administration called, the War on Terrorism. Over the next two years, the Bush administration went to war in Afganistan and Iraq. The United States created a new department of homeland security to coordinate efforts to improve safety at home and impose severe limits of civil liberties of those suspected of a connection with terrorism. Along with others, this law particularly targeted immigrants from the Middle East. This incident also caused the increased security in airports to ensure that no airline passenger would ever be able to successfully board a plane with weapons. This also eventually led to the full body scan that recently went into place.

All three of these incidents caused an immense amount of pain, deaths and suffering. All of these three events, especially Pearl Harbor and September 11, would be something the entire generation of people who lived through it would always remember. All three of these resulted in a declaration of war against the country or countries responsible. Although it is now believed that Cuba was not responsible for the sinking of the USS Maine; however, at the time, Cuba was still held responsible for it. The bombing of the World Trade Center and Pearl Harbor have been proven to truly be acts of violence; whereas, the sinking of the USS Maine is now thought to be an accident. 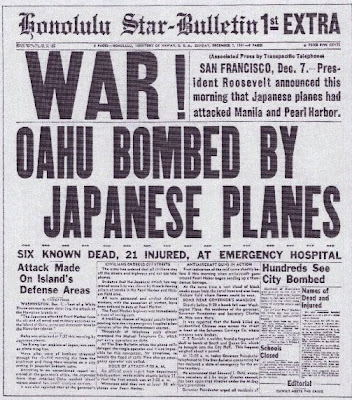 This entry was posted in admin only: Featured, Assignment due December 7, KM24 and tagged Pearl Harbor, September 11, Sinking of the Maine, terrorism, Tragedy, War. Bookmark the permalink.