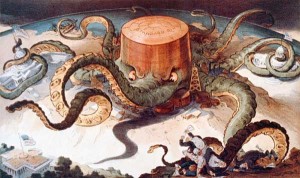 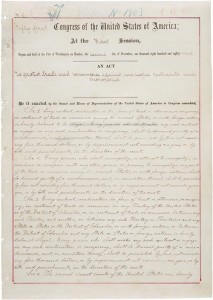 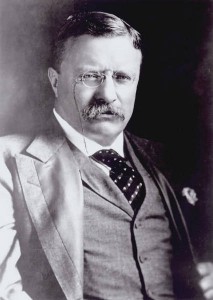 The pictures above display the chronological events that first began with the creation of monopolies. John D. Rockefeller formed the Standard Oil Company in 1865 and within a decade he was in control of all the oil refineries in the United States. As the company grew to prosper so much it became a trust which led to arousing controversy over the United States. Many people were  suffering because of monopolies like Standard Oil which took away many local businesses and jobs.

The rising power of the monopolies was taken to court therefore the Sherman Antitrust Act was developed in 1890. This was the first step taken to prevent trusts and slowly helped diminish the trusts with the order of the federal government. Although many measures were taken to discontinue trusts from being created or continued, President Theodore Roosevelt worked strongly towards completely putting an end to it. He was well known for trust busting as he first got elected as president. Monopolies, Sherman Antitrust Act, and President Theodore Roosevelt are all brought together by political and economic forces.

This entry was posted in Assignment due December 7, TV24 and tagged monopolies, Sherman Ant, Theodore Roosevelt. Bookmark the permalink.