Article in the New York Times covers “the dark side of open access,” detailing the effort of academics to identify and combat pseudo-science publications and those journals with less-than-rigorous standards for article submissions.

The sources cited are informative and useful for academics for avoiding scam publications and bogus conference offers. Jeffrey Beall’s website maintains a list of individual journals that have made his blacklist and the criteria in which he uses to identify these journals. Also, the special issue of Nature covering “The Future of Publishing” featuring articles “The dark side of publishing” and “Sham journals scam authors” among others.

A recent article from the Business Information Review features mobile applications of interest to information professionals and researchers. Many of the apps mentioned are being used by librarians here, but there are few that were new to me.

Hoovers has two apps providing access to basic Hoover’s company information. They can be found here: http://www.hoovers.com/marketing/100003463-1.html The Hoover’s apps are only available for iPhones so as an Android user I can’t vouch for the content of these applications.

Also highlighted in the article is the federal government’s application portal: Apps.usa.gov. This great resource currently provides access to 250+ applications from many government offices, agencies, etc., covering a wide range of information topics.

We discussed the the new IDS Search/Beta CUNY catalog: what we liked, didn’t like, concerns about adopting this catalog and how it can be improved. Baruch along with LaGuardia, City College and The Graduate Center are test running the IDS search.

We discussed the Viewshare service from the National Digital Information Infrastructure and Preservation Program at the Library of Congress. Viewshare is a free service for exhibiting digital collections. Linda led the discussion as she’s using Viewshare for displaying information pertaining to film festivals as part of project she’s working on.

We also spent some time deliberating on how to list databases on the new redesigned website and looked at examples of how other libraries have used LibGuides to do so. Discussed a PC I built from scratch this past Fall. Based the build on the book, Building the Perfect PC. Several types of PC builds are presented by budget and purpose including:

I choose to build a Mainstream PC, balancing affordability, space, expandability and performance for the tasks I require.  The book was written in 2010, so I updated some of the components from the book by referencing the message board the authors maintain at HardwareGuys. I used a few others sources as well.

I used the Logical Increments PC Buying Guide to compare my components to this guide. The guide is updated monthly and floats around several PC build forums. I used it to benchmark against a slightly different component lists and to compare their bottom line to mine. My PC would be categorized in “Great” with similar components and price range. The actual components I used are in the table below.

In addition, I referenced LifeHacker’s The First-Timer’s Guide to Building a Computer from Scratch for larger images and additional explanations for the installation process. Building a PC, according to some sources, should only take a couple of hours, but it took me most of the day with just being careful and triple-checking each step, every component and every detail. When it came time to turn it on, to my surprise it worked perfectly.

After letting the PC run a recommended twenty-four hours to make sure none of the hardware components malfunctioned, I updated the BIOS, installed the operating systems and all the software. Viola! I had a new PC.

I was motivated to build my own PC in order to learn about about computer components, maybe save money in the long-run and, hopefully, make a better machine that will last longer than a pre-fabricated unit from a manufacturer. Overall I did learn quite a bit. Performance is everything I had hoped for.  My collective components cost more than buying a similar machine off the shelf so whether or not I save money depends on the life-span of this computer. Certainly with the knowledge I gained I’ll have an easier time upgrading components if I so desire.

Next, Rita shared the following link from the Sage website from the Addthis platform, for connecting website content to social networking sites for the pupose of sharing that content. There are 316 different applications listed here. It was remarked that this is an impressive list when you consider how many of these applications we were unfamiliar with.

Eventually this lead the conversation to a piece in the NYTimes Magazine about how companies are tracking our shopping habits. One of the most startling examples was noted in a Forbes post about the article about how Target analyzed the buying patterns of a certain teenager and determined she was pregnant. They proceeded to send her advertisements pertaining to an expecting mother. The problem was the girl had not told her parents she was pregnant and still lived under their roof. To figure out how Target was able to determine this girl was expecting, read the NYTimes Magazine or summarized Forbes post. Or, read the small excerpt below:

“Lotions, for example. Lots of people buy lotion, but one of Pole’s colleagues noticed that women on the baby registry were buying larger quantities of unscented lotion around the beginning of their second trimester. Another analyst noted that sometime in the first 20 weeks, pregnant women loaded up on supplements like calcium, magnesium and zinc. Many shoppers purchase soap and cotton balls, but when someone suddenly starts buying lots of scent-free soap and extra-big bags of cotton balls, in addition to hand sanitizers and washcloths, it signals they could be getting close to their delivery date.”

Cost of Knowledge, the Elsevier Boycott

This week’s On the Media reported on the Elsevier Boycott that was initiated in December by Cambridge University mathethematics professor Timothy Gowers. The boycott seeks commitments from academics to refrain from participating in publishing, refereeing and editorial work for Elsevier publications.  New Scientist has dubbed this movement, now with 7,000 petition signees,  the “Academic Spring.”

The Boycott singles out Elsevier’s business practices as being counterproductive to the spirit and goals of academic publishing–disseminating academic research and knowledge. The boycott’s Statement of Purpose  portrays Elsevier as, “a publisher motivated purely by profit, with no genuine interest in or commitment to mathematical knowledge and the community of academic mathematicians that generates it.” As it goes on to explain, there are many publishers that could have been targeted, but Elsevier was chosen as a eggregious example of a publishing company that acts in opposition to the  exchange of information in academia.

Below are the three objections to Elsevier’s business practices spelled out at the petititon website thecostofknowledge.com:

For their part, Elsevier has issued their own statement claiming the boycott is based on erroneous information and dispute the assertion that the price increases are unjustified. I’ve gleaned the following points from their press releases and whilst listening to interviews with company spokespersons:

The petition, signees and statement of pupose can be found at Cost of Knowledge.

Posted in Uncategorized | Comments Off on Cost of Knowledge, the Elsevier Boycott

Facebook
In light of the rumored Facbook IPO we began by discussing the information Facebook keeps about its users and their activities. We watched a video posted on Information Aesthetics  regarding an Austrian Law student named Max who issued a request to Facebook  for his personal data and received a CD containing a 1,222 page document detailing his online activities. EU privacy law compels companies to respond to such information requests from citizens within 40 days. Apropos this conversation, this past weekend On the Media reported on this very case as well as other stories during this weekend’s episode: “The Facebook Show”.  The recent  publication of “Web of Deceit: Misinformation and Manipulation in the Age of Social Media” by Anne P. Mintz was also noted during the discussion.

This lead to a review of the recent addition of  U.S. Consumer/Lifestyle information to the ReferenceUSA database and the sources for the info contained in this dataset.

Qualtics
We also discussed various  forms librarians have built with Qualtrics and the challenges in creating them. Below is one such form for library book purchasing which can be shared with faculty and departments:

Other topics
Lastly, we discussed Clicker registration for Fall semester as well as scanning and printing policies and procedures. We watched a few videos from the Youtube page for the Museum of Obsolete Objects. This page shows a video clips for several obsolete technologies like the phonograph, abacus, hand-held egg beaters and and the rotary phone.

We then listened to an interview with Karen Coyle by David Weinberger from the Harvard Library Innovation Laboratory. She discussed metadata of library contents for connecting resources beyond the library world.

We also discussed ExLibris in regards to our new library website redesign.

LexisNexis in a box was mentioned as an example of outdated technology. A picture of the LexisNexis Ubiq, complete with dot matrix printer is below. 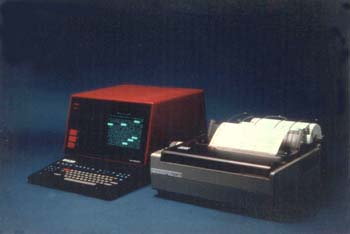 I’ve run across NYU’s website and am impressed at how their LibGuides incorporate the overall Library website design and theme. Rather than looking like the separate platform it is, it conforms to the overall appearance with colors and typography. I hope we can achieve something similar with the redesign for our LibGuides and other integrated platforms.