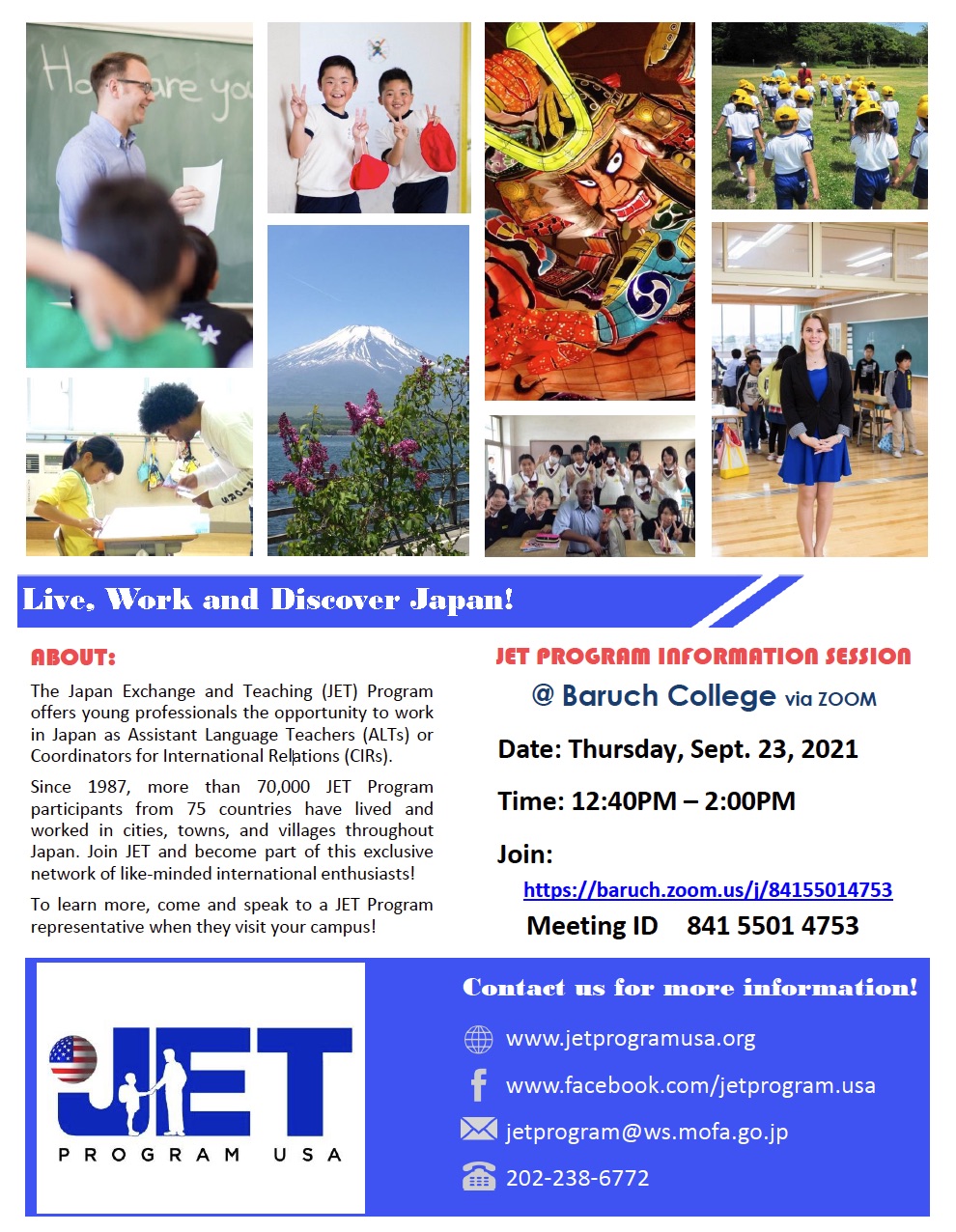 What Can You Do with a Degree in Japanese Studies?

To major Japanese, there is an option offered through the CUNY B.A. Program. See more information: https://cunyba.cuny.edu/

Also, you might want to check out this “Japan Studies at CUNY” website. There are many Japan-related courses across CUNY campuses: https://tokyo2021.commons.gc.cuny.edu/japan-studies-at-cuny/

Deadlines for 2021 Joint-Scholarships are Fast Approaching!

The application for the summer 2021 Critical Language Scholarship (CLS) Program will close in just four weeks on Tuesday, November 17 at 8:00pm Eastern. We welcome your students to apply now to learn a critical foreign language next summer on a fully-funded study abroad program.

The application is now live and available online at:  https://www.clscholarship.org/apply

The CLS Program, a program of the U.S. Department of State, is an intensive overseas language and cultural immersion program for American students enrolled at U.S. colleges and universities. Students spend eight to ten weeks abroad studying one of 15 critical languages including . The program includes intensive language instruction and structured cultural to both stud

enrichment experiences designed to promote rapid language gains. Most languages offered by the CLS Program (9 of 15) do not require applicants to have any experience studying critical languages.

We have hosted a number of information sessions this fall, including sessions specific to our 15 separate language programs and a session for beginners who may not know where to begin when selecting a language for their application. Recordings of these webinars are available here: https://www.youtube.com/playlist?list=PLc6m86vaPU3a8zJTLzmh0YEZ9etUmaQd5

Email templates are available on our web site to assist you in reaching out to your students: https://clscholarship.org/advisors/advisor-resources/email-templates

We count on university faculty and advisors to encourage all students who may benefit from learning a critical language to apply for the CLS Program! Our Azerbaijani, Bangla, Hindi, Indonesian, Persian, Punjabi, Swahili, Turkish, and Urdu programs are open to absolute beginners with no previous language experience; we hope you can help us to communicate the value of learning a less-commonly taught language with your students.

CLS, a program of the U.S. Department of State, is part of a wider government initiative to expand the number of Americans studying and mastering foreign languages that are critical to national security and economic prosperity. CLS plays an important role in preparing students for the 21st century’s globalized workforce and increasing national competitiveness.

We appreciate your consideration. Please let me know if you have any questions.

Through a Glass Darkly: Identity Crises in Ghost in the Shell and Neon Genesis Evangelion

Through a Glass Darkly: Identity Crises in Ghost in the Shell and Neon Genesis Evangelion

For our second session, we will analyze two of the most iconic animes: Ghost in the Shell and Neon Genesis Evangelion, both of which have been producing new works since their release 25 years ago.

These works are two massive monuments in the anime canon, both emerging as cyberpunk epics in the mid-1990s, each addressing issues of identity and the potential for technological interventions. However, they both manage to do so in different ways and with differently composed subjects. This discussion will address both the interesting similarities, but more compellingly, the particular differences with which Oshii and Anno understood this cyberpunk discourse. Two experts—Dr. Susan Napier and Dr. Stevie Suan—will help us to unravel these complex and fascinating anime works.

It will be followed by a live Q&A session. If you have any questions about the two titles, please feel free to ask about it on the Eventbrite page when you register. Live commentary will also be enabled on the YouTube stream, so you can participate in the live Q&A.

This is a free event. Registrants will receive the link to the stream via email. The date and time of the event are Eastern Time. Please check your local time zone.

To view the first session, “Roundtable: Why Do We Study Anime and Manga?”, click here.

Susan Napier is the Goldthwaite Professor of Rhetoric and Professor of Japanese Studies at Tufts University. She teaches courses on Japanese culture, including a seminar on Miyazaki, and also on comparative film and literature, including a course on “The Cinema of Apocalypse” and one on “Fantasy in World Culture.”

Stevie Suan is an Assistant Professor at Hosei University in the Faculty of Global and Interdisciplinary Studies. He holds a doctorate in Manga Studies from the Graduate School of Manga Studies at Kyoto Seika University and received his MA in Asian Studies from the University of Hawai‛i at Mānoa. His main area of expertise is in anime aesthetics through which he explores various modes of existence. In his recent research, he uses performance/performativity theory and media theory to approach issues of area studies (Japan studies and Asian studies), using anime as a prime example of the shifting currents of cultural production and consumption in our moment of globalization.

Dr. Suan is on the Steering Committee for the Mechademia Asia Conference, held every 2 years at the Kyoto International Manga Museum. He is also an associate editor for the Mechademia: Second Arc journal, as well as on the editorial board of the journal for the Japan Society of Animation Studies.

Frenchy Lunning has written two books—Subcultural Fashion: Fetish Style (Bloomsbury, 2013) and Cosplay: The Masque of Fandom (University of Minnesota Press, 2017)—and is working on a third, Revolutionary Girl: Shōjo. She has also written various essays in anthologies and journals. The director of the academic conferences SGMS: Mechademia Conference on Asian Popular Cultures in both the US and in Asia, she was also the editor-in-chief of Mechademia, a completed ten-volume book series published by the University of Minnesota Press, and is now co-editor-in-chief of the new Mechademia: Second Arc journal, the first issue in spring of 2019.

Reading and conversation with Xiaolu Guo

Born in China, Xiaolu Guo is a writer and filmmaker. Her feature She, a Chinese (2009) is a movie that won the top award at the Locarno International Film Festival. The first of her novels to be written in English, “A Concise Chinese-English Dictionary for Lovers,” has been translated into 26 languages, and her 2017 memoir, Nine Continents, won the National Book Critics Circle Award for Autobiography.

Guo will be teaching JRN 3650/3650H Visual Narratives: Writing for Film and Television. Her course will focus on the role of the screenwriter and examine various methods of developing a dramatic screenplay. In-class workshops will address the construction of dialogue, characters, scenes, and stories, as students learn to edit and critique their own and others’ work.

Learn more about Guo through her personal website and her Baruch Library Resource Guide.

By way of Introduction:

Edo Avant Garde reveals the pivotal role Japanese artists of the Edo era (1603 ~ 1868) played in setting the stage for the “modern” art movement in the West. During the Edo era, bold Japanese artists innovated abstraction, minimalism, geometric composition and the illusion of 3-D. Their originality is most striking in images of nature depicted on large-scale folding screens. Scholars, priests, curators and collectors trace the artists’ ingenuity to their profound engagement with the natural world and their reverence for the spirits inhabiting it, inspired by Buddhism and Shinto animism.

To capture the dynamism, scale and meticulous details of the art, we filmed two hundred folding screens and hanging scrolls in museums and private collections across the U.S. and Japan, along with remote temples and shrines and in the bamboo groves, misted valleys and churning waves that inspired the artists centuries ago. We received special permission to film the works without protective glass, many in sunlight, one in candlelight, the way Japanese people experienced them centuries ago. The film is a meditative cinematic assemblage of masterpieces only made possible by my unprecedented access.

I hope you enjoy my film 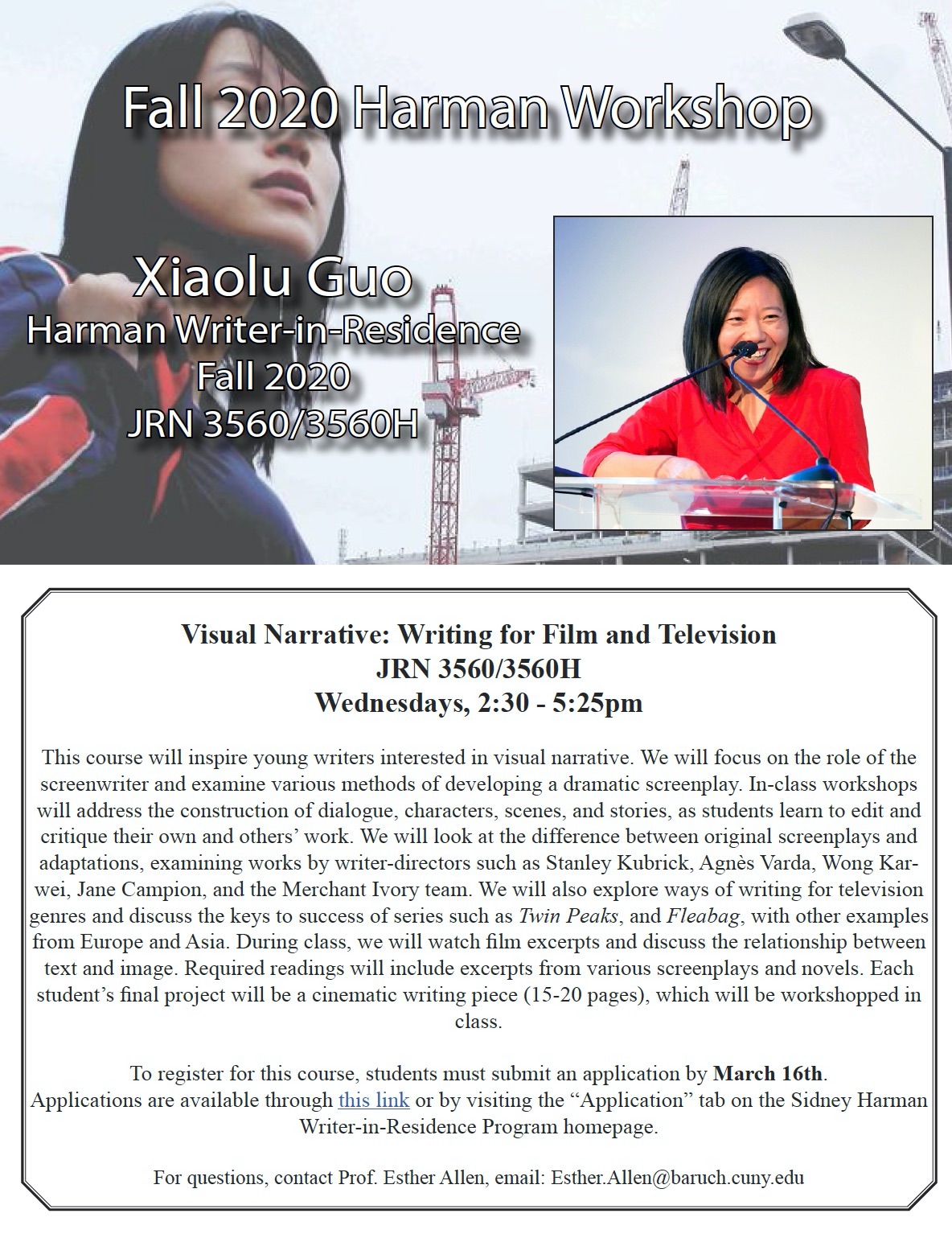 Hi- Hope you are having a wonderful day.
This is Asaki Takahashi (recruiter) from Actus Consulting Group, Inc.

Here I have attached some entry level positions that are currently
opened. Please take a look and share it with the students who may be
interested. If there are any students who are interested in specific job
that’s listed in the PDF or are looking for a job in general, please
have them contact me.

If you do not wish to receive this list of open positions any more,
please let me know.

And please do not hesitate to contact me if you have any questions.

Actus New Office in San Francisco!
Location: 650 California St. San Francisco, CA 94108
******************************
We consider applicants for all positions without discrimination
based on race, color, religion, sex, national origin, age,
military or veteran status, the presence of medical condition
or disability, or any other legally protected status.