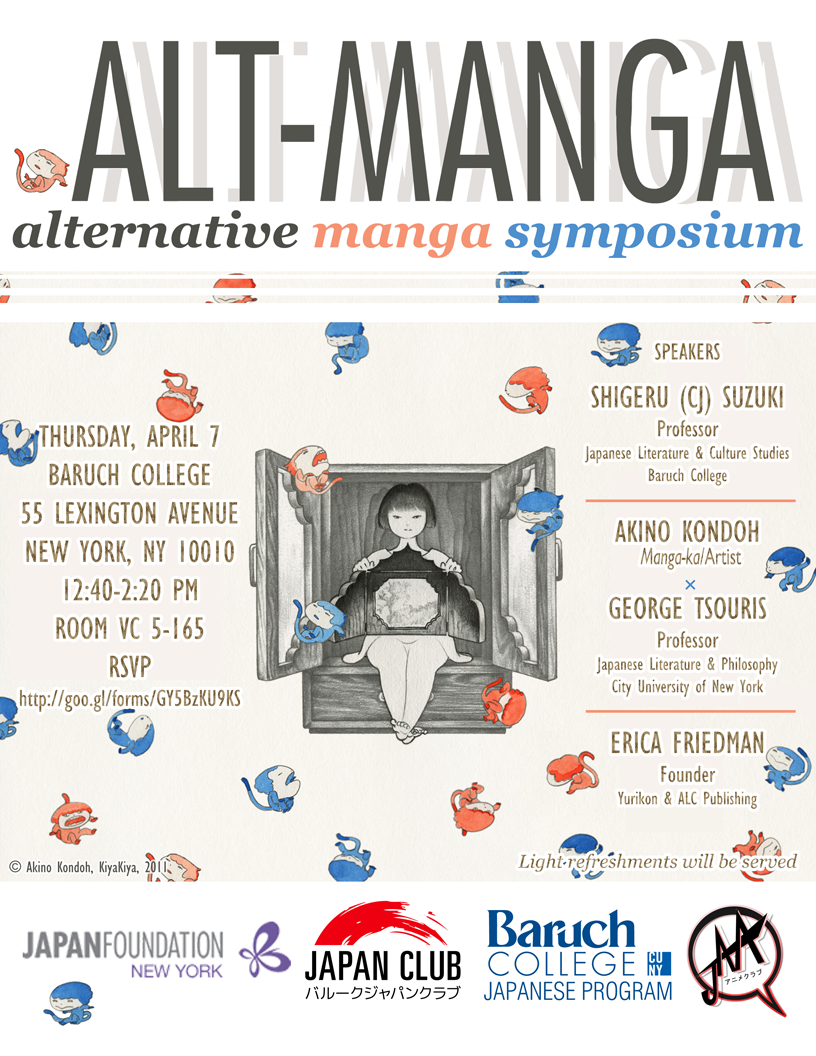 The “Alt-Manga Symposium” invites scholars, professionals, and artists in and around the city of New York to give lectures and conversations about Japanese comics known as manga. One of the primary objectives of the symposium is to show the rich and diverse world of Japanese comics with a focus on Japanese alternative and non-mainstream manga, and their development in both domestic and transnational contexts. The invited guest lecturers/artists are Akino Kondoh (NY-based manga/visual artist), Erica Friedman (the Founder of Yuricon, ALC Publishing), Professor George Tsouris (professor of Japanese literature and philosophy), and Professor Shige (CJ) Suzuki (organizer). The planned symposium is the successor of last year’s “Shōjo Manga Symposium” held at CUNY, Baruch College, and the “Shōjo Manga Exhibition” (Feb. 7 – Feb 27, 2015).

To reserve a seat for the symposium, please register on the website below.
http://goo.gl/forms/GY5BzKU9KS

Map and Access:
http://www.baruch.cuny.edu/map.html
The Symposium is held at the classroom VC5-165 Building B (The William and Anita Newman Vertical Campus)

The events are sponsored by the Japan Foundation, New York.

The event is free of charge and open to public, but attendee discretion is advised since adult content will be presented to facilitate topics of discussion.

This talk explores the socio-historical and cultural context of the development of gekiga by examining the shifting media ecology of Japanese comics industry, important comics artists and their works, and the impact of gekiga on other artistic and cultural practices. The focus will be on two major “alternative” magazines: Garo (1964 – 2002) and COM (1967-1972), both of which offered an outlet for innovative, unorthodox, and transgressive artists. Both comics magazines not only expanded comics expressions but also pushed the conceptual horizon of “manga,” attempting to legitimize the artistic value of comics while maintaining a sense of unruly proclivity by being “alternative.” This opening talk traces the emergence and development of gekiga as Japanese alternative comics in the context of postwar Japanese visual culture, mainly from mid-1950s to early 1970s, illustrating how both these comics magazines played a role in shaping the visual culture of Japanese counterculture.

The discussion between George Tsouris and Akino Kondoh explores the manga, animation, and visual artworks of Ms. Kondoh. Special attention will be paid to how her works express feelings of isolation felt as a female in America and Japan. We will also examine how her works represent the feminine immigrant experience in New York City, and compare and contrast her experiences in America and Japan as an artist who works across different media. In this context, we will also discuss how Ms. Kondoh manages a successful art career in today’s world.

This talk establishes the social and political landscape and market forces that brought about a rise in manga by and for gender and sexual minorities, both in Japan and the west. Starting with the days before the Internet, as fan communities developed and digressed, through contemporary political shifts, this talk contextualizes the complex interplay of fan, creator and industry needs in regards to identification with and representation of sexual and gender minorities in manga.