Join actor and social justice activist George Takei at the Japan Society for a conversation about his personal story and his new Broadway musical, Allegiance. Best known for his portrayal of Mr. Sulu on Star Trek, and more recently for his role as a social media mega-star, Takei spent a large part of his childhood behind the barbed-wire enclosures of US internment camps. His desire to shed light on this troubling chapter of American history, in which some 120,000 Japanese Americans were forcibly relocated from their homes to internment camps during World World II, inspired him to develop Allegiance.

The event is moderated by Kermit Roosevelt, who wrote a historical novel on the same topic. Roosevelt is a professor of constitutional law at the University of Pennsylvania Law School and the great-great-grandson of President Theodore Roosevelt.Followed by a reception.

Posted in Uncategorized | Comments Off on George Takei: From Barbed Wire to Broadway@Japan Society

The Queens College Japanese Studies Department is hosting a lecture by a Nagasaki’s Hibakusha.

THE LESSONS OF NAGASAKI: THE ATO BOMB FROM 1945 TO THE PRESENT

The 90 minute program will include an introduction to the destructive power of nuclear weapons, an update on nuclear weapons today and the renewed international movement for a global ban on humanitarian grounds. Also eye witness testimony from a survivor of the atomic bomb dropped on the Japanese city of Nagasaki on August 9, 1945.

Posted in Non-Baruch Event | Comments Off on Queens College: Lessons of Nagasaki 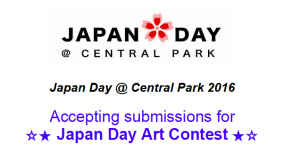 Today we are thrilled to announce our 5th Annual “Japan Day Art Contest.” The winning artwork will become the official image of Japan Day @ Central Park 2016 and will be used for our official poster, program, flyer and T-­‐shirts. The grand prize winner will also receive a pair of round-­‐trip Economy Class tickets to Japan, provided by ANA.

The grand prize winner and all honorable mention winners will each receive a digital camera provided by Nikon Americas Inc. Moreover, their artwork will be displayed at an exhibition space on the 18th floor of the Consulate General of Japan in New York. All winners will be honored at an award ceremony on the day of the event.

• Only two-­dimensional media is accepted. • Only one submission per artist will be accepted.

• All entries must be the original work of the entering artist.

• Artwork which has been submitted to previous contests and/or previously shown or published is not eligible.

• Artwork does not need to include the Japan Day logo or any text related to the event.

• Artwork that violates copyrights, intellectual property rights, and/or any related rights of a third party, is not eligible. (For example, the use of existing anime characters would be a violation of copyrights.)

• Art must not contain explicit sexuality, violence, or any discriminatory elements.

• The final layout and design of the poster, flyer and other publicity materials will be created and approved by Japan Day Inc. Artist’s approval is not required for publication.

• By submitting their artwork, artists grant Japan Day Inc. the right to use their work for the purpose of marketing, exhibition and other Japan Day-­‐related uses.

• Artists must be available to accept their awards on the day of the event.

Please visit the Art Contest section on our website: www.japandaynyc.org/art-contest-2016

o Digital camera provided by Nikon Americas Inc. In addition to above, all winners’ artwork will be displayed at an exhibition space on the 18th floor of the Consulate General of Japan in New York.

*A pair of round-­‐trip economy class tickets to Japan (JFK – Tokyo/Narita), exclusive of

Posted in Uncategorized | Comments Off on Japan Day Art Contest 2016

Japan Day @ Central Park 2016 is entering its tenth season. The annual event is a celebration and showcase of Japanese culture and cuisine.

The organization is now accepting submissions for the Japan Day Art Contest and applications for stage performers and food tent and activity tent volunteers. The event is expected to be held at Central Park in May 2016.

The winning artwork from the 5th Annual Japan Day Art Contest will become the official image of Japan Day @ Central Park 2016 and will be used for the organization’s official poster, program, flyer and T-shirts. The grand-prize winner will also receive a pair of round-trip Economy Class tickets to Japan, provided by ANA. The grand-prize winner and all honorable mention winners will receive a digital camera provided by Nikon Americas Inc. Their artwork will be displayed at an exhibition space at the Consulate General of Japan in New York.

To apply, please visit Japan Day’s website. The deadline to enter the Japan Day Art Contest is Sunday, January 31, 2016 at 11:00 p.m. All winners will be announced in late March to early April 2016.

Japan Day is also currently seeking volunteers interested in hosting a food or activity tent. Activity tents include a variety of family-friendly Japanese activities, while food tents offer free samples of mouth-watering Japanese cuisine. If you are a performer of traditional or contemporary Japanese music or dance, you may consider applying for the Japan Day stage program. The deadline to apply is Sunday, January 31, 2016 at 11:00 p.m.