Career Forum for Positions in the U.S

I just wanted to send you and your students studying Japanese
one last reminder about the [Career Forum for Positions in the U.S]
coming up next weekend on May 30th.

This will be a great event for students of Japanese language,
as about 25 companies will be hiring for positions all over the country.

As per usual, you will find attached an email text for your students
regarding the event. If you can forward this message on to them
or have it available on your newsletter/website/facebook,
it would be greatly appreciated.

Please feel free to contact me at anytime with questions or comments.

Thank you again for all of your assistance!

Posted in Uncategorized | Comments Off on Career Forum for Positions in the U.S

MAY 9 – STRANGE AND BEAUTIFUL – ART RECEPTION

Sungjin Lee and Shuto Okayasu are pleased to announce their joint exhibition at ShapeShifter Lab in Brooklyn, NY at 18 Whitwell Pl, Brooklyn, NY 11215 from Saturday May 9 to Sunday May 31, 2015.

The exhibition consists of artworks created by 2 artists, Shuto Okayasu from Japan and Sungjin Lee from South Korea.

Okayasu has been bouncing between photo-realistic and surrealistic images and sampling famous cartoon characters and scenes to create his paintings. Heavily influenced by cut and paste, sampling of Hip Hop culture, he patchworks his perception of everyday life, navigating viewers into a hyper realistic dreamy world.

Lee has lived in Japan for 10 years before residing in the US. Taking objective views to post-World War 2 South Korea and Japan under the influences of US government generates the ideology behind his works. He explores his unique vision through paintings, sculptures, music and video works.

This exhibition explores perspective on how our world is structured through Okayasu and Lee’s works. 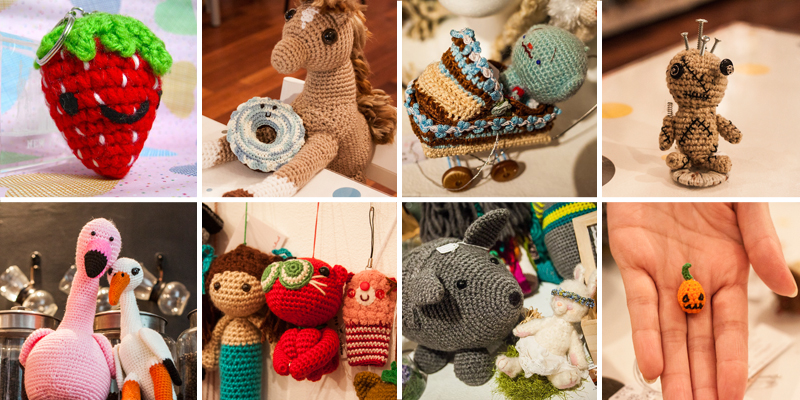 Join the RESOBOX community of crocheting, knitting, and amigurumi-making! You can bring your own project or work on the weekly project. All levels of experience are welcome to join!

Inspired by the amazing response to our first World Amigurumi Exhibit, RESOBOX has decided to hold its own crocheting and amigurumi-making group. This group holds weekly meetings on Tuesdays from 7:00 PM until 8:30 PM at RESOBOX Gallery where crocheters and amigurumi-lovers of all experience levels are encouraged to learn from one another and create things together.

Everyone who joins this group is welcome to work on their own projects, but Jing (RESOBOX’s crochet and amigurumi instructor) will be available during the meetings to help and answer any questions. She will also be leading an amigurumi project each week for those who don’t have their own project to work on. All experience levels (and ages) are welcome to join this group, and we encourage advanced and intermediate crocheters to help the beginners.

There is no class fee to join this group! However, there is a one drink minimum. Please check RESOBOX’s cafe menu for a full list of the delicious drinks we offer.

And don’t forget to join the RESOBOX Crocheting & Amigurumi Making Facebook Group to stay up to date!

This year’s Japan Day will feature a special performance by AKB48. Check out a video message from (from the left) Saho Iwatate, Ryoka Oshima, Tomu Muto, Haruna Kojima, Rina Hirata, and Rena Nozawa, the six members that will be coming to Japan Day.

Posted in Uncategorized | Comments Off on JAPAN DAY 2015 at Central Park (Sunday, May 10th)

How Emoji Got to the White House (from New Yorker)

Some Japanese Culture Events from the website of Consulate of Japan at New York.
http://www.ny.us.emb-japan.go.jp/en/n/01.html

Posted in Uncategorized | Comments Off on Japan-related Culture Events Info.

Another Monkey Business Event at a Bookstore in Manhattan (Wed. 8 pm)

Join Monkey Business International editors Motoyuki Shibata, Ted Goossen, and Roland Kelts as they celebrate the release of MBI Issue 5 with some of the journal’s contributors.

Host(s): Motoyuki Shibata, Ted Goossen, Roland Kelts
Appearing: Aoko Matsuda, Satoshi Kitamura, Kelly Link, Ben Katchor
About Monkey Business:
Monkey Business International is the in-translation offspring of the Tokyo-based magazine Monkey Business, which was founded in 2008 by Motoyuki Shibata, one of Japan’s most highly regarded men of letters.
Author Bio(s):
Ben Katchor is a highly esteemed cartoonist whose books include Julius Knipl, Real Estate Photographer: The Beauty Supply District (translated into Japanese), The Cardboard Valise and Hand-Drying in America. His picture stories appear in Metropolis. The latest issue of Monkey Business contains two episodes from his Shoehorn Technique. He is an Associate Professor at Parsons The New School for Design in New York City.
Satoshi Kitamura is an award-winning picture-book artist and illustrator. His books include When Sheep Cannot Sleep: The Counting Book, Millie’s Marvelous Hat, and Lily Takes a Walk. He has worked with numerous artists and poets, especially with poet John Agard, with whom he has collaborated on a number of books including The Young Inferno and Goldilocks on CCTV. Kitamura has contributed to the latest issue of Monkey Business (5) “Variation and Theme,” a graphic narrative inspired by a Charles Simic poem.
Kelly Link is an award-winning short-story writer, and one of the most important voices to appear in the United States in the 2000s. She runs her own publishing house, The Small Beer Press, with her husband Gavin Grant. She has published four collections of stories: Stranger Things Happen, Magic for Beginners, and Pretty Monsters (all of which have been translated into Japanese) and her latest book Get in Trouble, published in February 2015. She contributed an essay on the experience of her visits to Japan in Monkey Business 5.
Aoko Matsuda is one of Japan’s most promising young Japanese novelists. She has published two collections of short stories and has also translated Karen Russell’s St. Lucy’s Home for Girls Raised by Wolves. Among English translations of her work are “Photographs Are Images,” translated by Jeffrey Angles and included in the current issue of Monkey Business (5), as well as “Smartening Up,” translated by Polly Barton in the online edition of the literary magazine Granta.
About the editors/translators:
Roland Kelts is the author of the critically acclaimed and best-selling Japanamerica. His articles, essays and stories are published in The New Yorker, Time, The Wall Street Journal, Zoetrope: All Story, The Village Voice, A Public Space, Newsweek Japan, Vogue, Cosmopolitan, The Yomiuri and The Japan Times among others. He is also a regular contributor to CNN, The BBC, NPR and NHK. He is a visiting scholar at Keio University and contributing editor to Monkey Business. He divides his time between New York and Tokyo, and his forthcoming novel is called Access.
Ted Goossen teaches Japanese literature and film at York University in Toronto. He is the general editor of The Oxford Book of Japanese Short Stories and has published translations of stories and essays by Hiromi Kawakami, Haruki Murakami, Yoko Ogawa, Sachiko Kishimoto, and Naoya Shiga, among others. He is the co-founder and co-editor of Monkey Business.
Motoyuki Shibata is a professor at the University of Tokyo and the co-founder of the literary magazine Monkey Business, which exists in both English and Japanese as an English-language journal focusing on contemporary Japanese literature. He also runs Monkey, a Japanese literary magazine. A translator, reviewer, and essayist, he has translated into Japanese the works of contemporary American authors including Thomas Pynchon, Paul Auster, Steve Erickson, Steven Millhauser, Richard Powers, Stuart Dybek, Barry Yourgrau, Ben Katchor, Ethan Canin and Kelly Link, among others. He received the 1992 Kodansha Essay Award for his book The Half-Hearted Scholar and was the winner of the 27th Suntory Prize for Social Sciences and Humanities for his collection of critical essays, American Narushisu (American Narcissus).

Posted in Uncategorized | Comments Off on Another Monkey Business Event at a Bookstore in Manhattan (Wed. 8 pm)

Professor Hikari Hori (Columbia Univ.) will give a talk on Japanese manga and TV anime series Attack on Titan.

Her talk is titled “Restricted Bodies and Anarchic Bodies: Cross Media Translation between Manga and Anime in Attack on Titan”

Posted in Uncategorized | Comments Off on Professor Hori Hikari on Attack on Titan (Wed, 6th from 2:30 pm at LaGuardia Community College)

Posted in Uncategorized | Comments Off on Queers and Comics (Friday, 8th, 2015) at CUNY Graduate Center