They will discuss Kazuo Tatsuta’s Ichi-F and the localization process of Japanese manga into the English-speaking audience.

The event is also to commemorate the Japan’s triple disaster–the earthquake, tsunami, and nuclear meltdown–in 2011. Please join us to this precious opportunity to take a peak at the manga publishing industry in the U.S.!

The March 11, 2011 tsunami and earthquake upended the Tohoku area of Japan, causing meltdowns at the Fukushima Daiichi Power Plant and devastating the surrounding region. Kazuto Tatsuta, then an aspiring mangaka, took an interest in the cleanup and restoration efforts, eventually joining them himself and documenting his experiences in the graphic memoir Ichi-F. What began as a brief “work report” eventually became a vital and rare public record of what is still an extremely secretive cleanup effort. In light of its historic importance and unique storytelling, Kodansha Comics decided that it was essential that Ichi-F be translated into English – but this is just the beginning of the story. Join Kodansha Comics editor Lauren Scanlan as she discusses the singular challenges involved with bringing Ichi-F to the English-speaking world.

On March 11, 2011, Japan suffered the largest earthquake in its modern history. The 9.0-magnitude quake threw up a devastating tsunami that wiped away entire towns, and caused, in the months afterward, three nuclear meltdowns at the Fukushima Daiichi Nuclear Plant. Altogether, it was the costliest natural disaster in human history.

This is not the story of that disaster.

This is the story of a man who took a job. Kazuto Tatsuta was an amateur artist who signed onto the dangerous task of cleaning up the Fukushima Daiichi Nuclear Plant, which the workers came to call “Ichi-F.” This is the story of that challenging work, of the trials faced by the local citizens, and of the unique camaraderie that built up between the mostly blue-collar workers who had to face the devious and invisible threat of radiation on a daily basis. After six months, Tatsuta’s body had absorbed the maximum annual dose of radiation allowed by regulations, and he was forced to take a break from the work crew, giving him the time to create this unprecedented, unauthorized, award-winning view of daily life at Fukushima Daiichi.

Lauren Scanlan is an editor for Kodansha Comics, and has worked on many series including Akira: 35thAnniversary Box Set, Sailor Moon Eternal Edition, and Land of the Lustrous. She has an MBA in Localization Management from the Middlebury Institute of International Studies at Monterey (MIIS), and has spent her career working in localization.

Eisner Award-nominated letterer, Deron Bennett knew early on that he wanted to work in comics. After receiving his B.F.A. from SCAD in 2002, Deron moved out to Los Angeles to pursue his career in sequential art. He quickly became a letterer and production artist with TOKYOPOP, but soon found himself returning to his hometown in New Jersey to raise a family. Since then, Deron has been providing lettering services for various comic book companies. His body of work includes Ichi-F, Attack on Titan Junior High, Cyborg 009, and Fairy Tail. You can learn more about Deron by visiting his website www.andworlddesign.com or following @andworlddesign on Twitter. 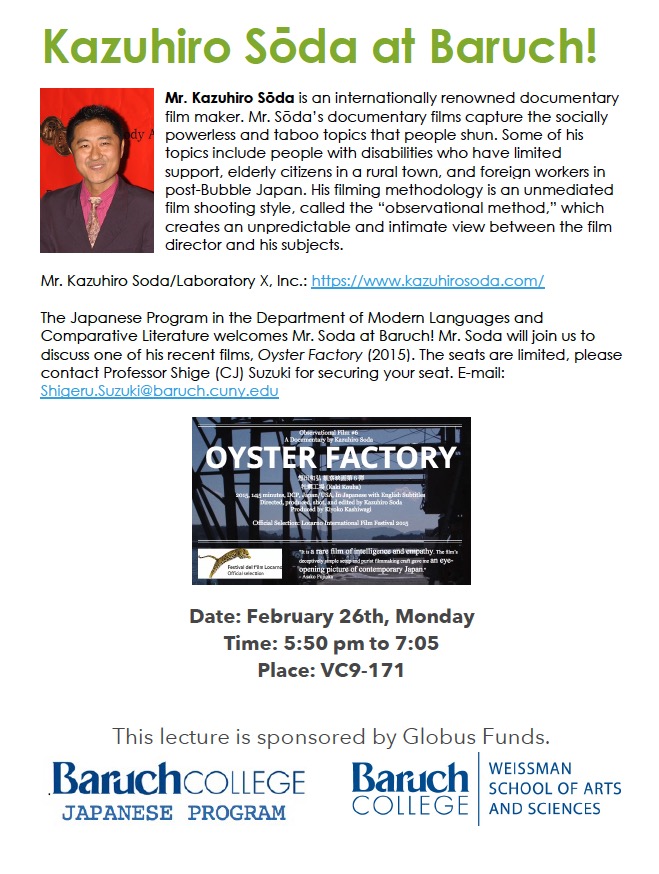 Students with some degree of both Japanese and English language abilities are invited to come speak and interview with hiring companies from all over the country for full-time positions in the U.S. at the upcoming U.S. Career Forum.

This will be a great opportunity to network and learn about the best way to use your Japanese language ability as part of your career. Many companies make offers of employment by the end of the event.

If you have questions about any of the Career Forums, please contact us at cfn@careerforum.net

We look forward to seeing you there!

Posted in Uncategorized | Comments Off on Upcoming U.S. Career Forum for your Japanese-English speaking students

Directing Godzilla: The Life of Filmmaker Ishiro Honda on Wednesday, February 21 at 6:30pm

Next week noted sci-fi scholar Steve Ryfle joins us at Japan Society to illuminate the life of filmmaker Ishiro Honda, the director behind the original Godzilla, Mothra, and Rodan movies!

Join us for Directing Godzilla: The Life of Filmmaker Ishiro Honda on Wednesday, February 21 at 6:30pm. The talk will be followed by a book signing of Ryfle’s new book, Ishiro Honda: A Life in Film, From Godzilla to Kurosawa, and a display of Godzilla memorabilia. You’ll also have a chance to purchase your own Godzilla collectibles!

Monster movie fans won’t want to miss out on this great event. Get your tickets today!

Posted in Uncategorized | Comments Off on Directing Godzilla: The Life of Filmmaker Ishiro Honda on Wednesday, February 21 at 6:30pm

The author Daniel Mendelsohn will be interviewed on stage and will read from his new book An Odyssey on Thursday, March 1 at 6pm in Engelman Hall at BPAC, co-sponsored by the Jewish Studies Center and Great Works.  Students and faculty are free, but reservations are necessary. They can be made by clicking the picture below, or visit www.baruch.cuny.edu/bpac and click the event link. Or emailRobert.Bronstein@baruch.cuny.edu  Tickets for the general public are $21.

Through generous funding from the Honjo Foundation, JAA is looking for qualified candidates for its 2018 JAA – HONJO Scholarship. This is open to students who will be enrolled in a full time course of graduate study (except medical, music, studio art and performing arts) at an accredited U.S. university in the greater New York area in academic year 2018-2019. The student should be able to demonstrate an interest in and ideally is already involved in furthering U.S. – Japan relations. The deadline for applications is noon, February 28, 2018. You can download the PDF application form and submit to the JAA.

If you are chosen as a recipient, you will be expected to stay in touch with the Honjo Foundation in Tokyo, Japan and let them know the status of your studies and how you have used your scholarship.

You may submit your application to:

Posted in Uncategorized | Comments Off on 2018 JAA – Honjo Scholarship Awards

This Thursday during club hours, Japan Club is holding an origami day!

Posted in Uncategorized | Comments Off on Hearts and Crafts (Origami Day) (Feb. 15th, 2018)

Posted on February 5, 2018 by Admin.
Posted in Uncategorized | Comments Off on Welcome Party by Baruch Japan Club (Feb. 8th, 2018)